The Baroque composer Johann Sebastian Bach appended the initials "SDG" to the musical manuscripts of each of his cantatas and many of his other works. This dedication was also used by his contemporary George Frideric Handel, who was a famous man of the world. The doctrine states essentially that everything that is done is for God's glory to the exclusion of humankind's self-glorification and pride. Humans are to be motivated and inspired by God's glory and not their own.

Thales was born in Milet in the year 624 BC. He is considered as the first philosopher ever and was a famous mathematician of the ancient world. Among other things the following proposition is attributed to Thales: 'Every angle of a triangle in a semicircle is a right angle.' This semicircle is called the Thales' Circle.

The Thales’ Circle is not only a means to create right angled triangles but also to construct a tangent from a certain point touching on a circle because every tangent is rectangular to the radius running through the one and only point of tangency. 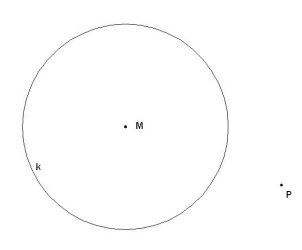 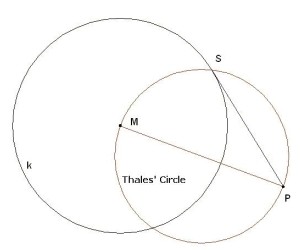 1. You have to construct a tangent from point P touching on the circle k with centre M.

2. Draw the Thales’ Circle with diameter PM. The tangent runs through point P and through the point of intersection S.

That is exactly what Micha Huber does with his Thales tonearm. The means of tangential tracking is based on the movement and the alignment on the Thales circle: All triangles ABC at the Thales circle around M are right-angled at C. As a result, BC is always at a right angle to AC and thus forms a tangent to the record groove with each radius AC at any position. By installing the pickup exactly below point C and aligned with BC, the result is – at variable BC lengths – a perfect tangential tracking. This design concept has been patented since 31 March 2005 under patent number CH694567. 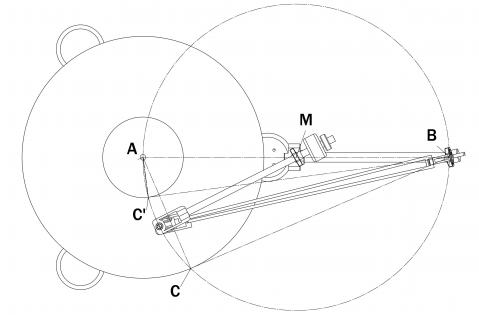 For more details, please refer to our Technology site.