While cutting the master disc of a vinyl LP, the cutting-tool is hold on a massive support and guided on a linear basis above the surface of the disc. This arrangement keeps the cutter-head rigid even if high cutting forces occur. 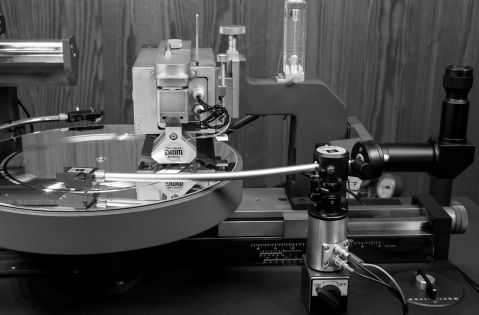 Tracking the LP for playback, demands totally different properties: The pickup-cartridge should follow the groove as smooth as possible and even tolerate eccentric and wavy vinyl. Therefore, radial pivoted tonearms have gained acceptance because they allow a tremendous reduction of unintentional forces at the tracking point. This mechanically preferred solution however ends up with a geometrical error since the cartridge is not guided tangentially to the groove anymore.

This so called tracking error basically distorts the music signal in a non-linear manner. When non-spherical (e.g. elliptical) diamond tips are used, further unwanted consequences occur, such as timing error and channel-differences in the frequency-response.

The unique Thales-solution combines in an elegant way the advantages of the tried and tested pivoted tonearm with the absolutely tangential tracking. This construction for which a patent was taken out on the 8th of May 2004 reduces the perfectly tangential tracking to pivot points, while the pick-up cartridge is taken and aligned on the Thales' Circle.

All triangles ABC on the Thales' Circle around M are rectangular in point C. Thus BC stands rectangular to AC and therefore tangential to the groove (red) with the radius AC. Because the pick-up cartridge is mounted exactly under point C and in the alignment of the straight line BC the tracking is perfectly tangential in every position.

From this completely new solution the following advantages ensue:

There is a small but impressive history of finding elegant solutions for tangential tracking of analogue records. Some of the inventors concentrated themselves on tetragon-geometry:

He announced in 1953 a patent with a tetragon tonearm where the cartridge was mounted in the middle of one side. Burne-Jones sold tonearms under his own name, and his idea was adapted several times.

This tonearm, launched in the seventies, is the best known solution, working almost tangential. The cartridge tip was mounted exactly below a pivot point. This idea made it possible to reduce the tracking error to +0.025° / -0.018°.

These solutions are not to be mixed up with the Thales Original solution, as the Thales is working on a triangle instead of a tetragon. Nevertheless, the experience with the Thales geometry made it possible for Micha Huber to even optimize the tetragon solution and reduce the tracking error to 0.006°, which is just the fourth of all the other solutions presented so far. This new geometry allowed to come very close to the perfect Thales geometry while using less parts and a very elegant design. 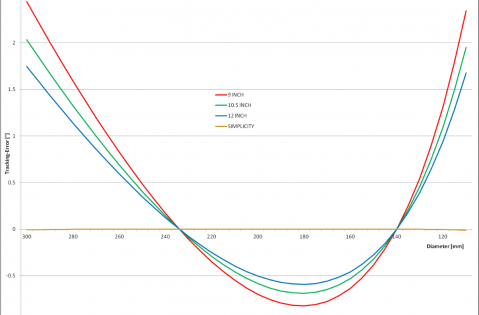 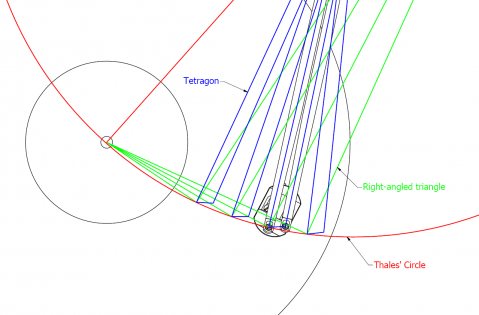 The geometrical basis for the Easy tonearm is a novelty in tonearm design. It is the first solution by Thales where none of the bearing points is located directly above the stylus. The clever arrangement of six bearing points creates three null points for the horizontal tracking error plus a zero point for the variable offset angle. Both tracking error and skating force are reduced. 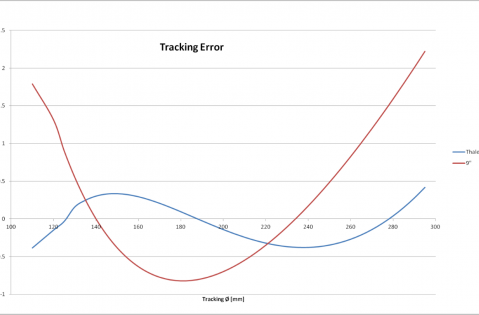 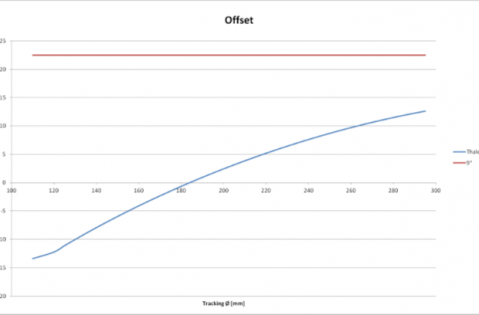 The skating force causes the tonearm to glide over the record from the outside to the inside, as it were 'to skate'. This force ensues indirectly from the friction between the tracking diamond and the record. It acts always in the direction of the tangent line. If the pivot point of the tonearm is not located on the tangent, the friction force is divided into two components: one acts in the direction of the pivot point of the tonearm, the other towards the centre of the disc.

The force Ft results from the friction between the record and the tracking diamond. It acts tangentially. Because the pivot point is not located on the tangent, this force is divided into Fa which acts in the direction of the pivot point and Fs which is the skating force. The value of the skating force is not easily determined. It depends first of all on the music signal, further on the tracking weight, the circumferential speed and the tonearm and diamond geometry.

Therefore, even if the Thales-tonearms do track tangentially, their offset angle requiers compensation of the skating force. Since the offset angle for all our tonearms are lower than with normal tonearms, we do preset the compensation and it’s not adjustable for the client. For the different solutions, the compensation mechanism is solved as follows: